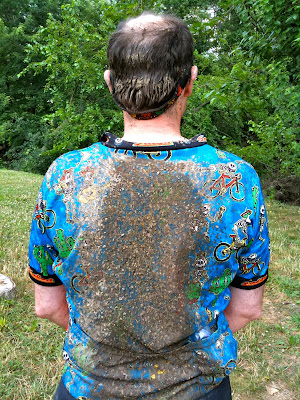 Before we set out my brother asked, "will we need fenders?" No, I replied confidently; weather reports are clear. Here we see the price of my hubris. (My innocent brother paid the identical price over three days, but as we know the universe is a cold and unfeeling place.)
Posted by John at 1:59 PM No comments:

Email ThisBlogThis!Share to TwitterShare to FacebookShare to Pinterest
Labels: Off topic, Photos, Weather

A tale full of sound and fury; signifying nothing

Two years ago, citing safety concerns, Montgomery County imposed a 15 mph speed limit on the county portion of the Capital Crescent Trail and installed rumble strips on the trail where it crosses Dorset Avenue and Little Falls Parkway at grade. For three or four weeks thereafter, it was not uncommon to see Montgomery County police cruisers conspicuously parked alongside the trail, radar in place, checking for violators.

The rumble strips were taken up after about a year. The speed limit – and the signs stating it – remain in place but enforcement today appears no more substantial than the fading stripes of paint that hint at where the rumble strips once were. Now, two years later, one wonders: What was the point? Are cyclists riding more slowly? Are there fewer accidents? Are pedestrians no longer startled by bicycles speeding past, inches from their elbows?

I confess that on my own almost daily (and always uphill) commute on the CCT I give absolutely no thought to my speed unless the trail is congested, in which case I find a pace to match conditions. It is of course risky extrapolate too freely from one's own experience, but it seems to reinforce the sentiment of several cyclists, expressed when the new rules were instituted, that this "solution" missed the point; that the limit was unrealistically low and that the freer application of common sense and courtesy by all trail users would go further toward enhancing trail safety.
Posted by John at 7:22 AM No comments: